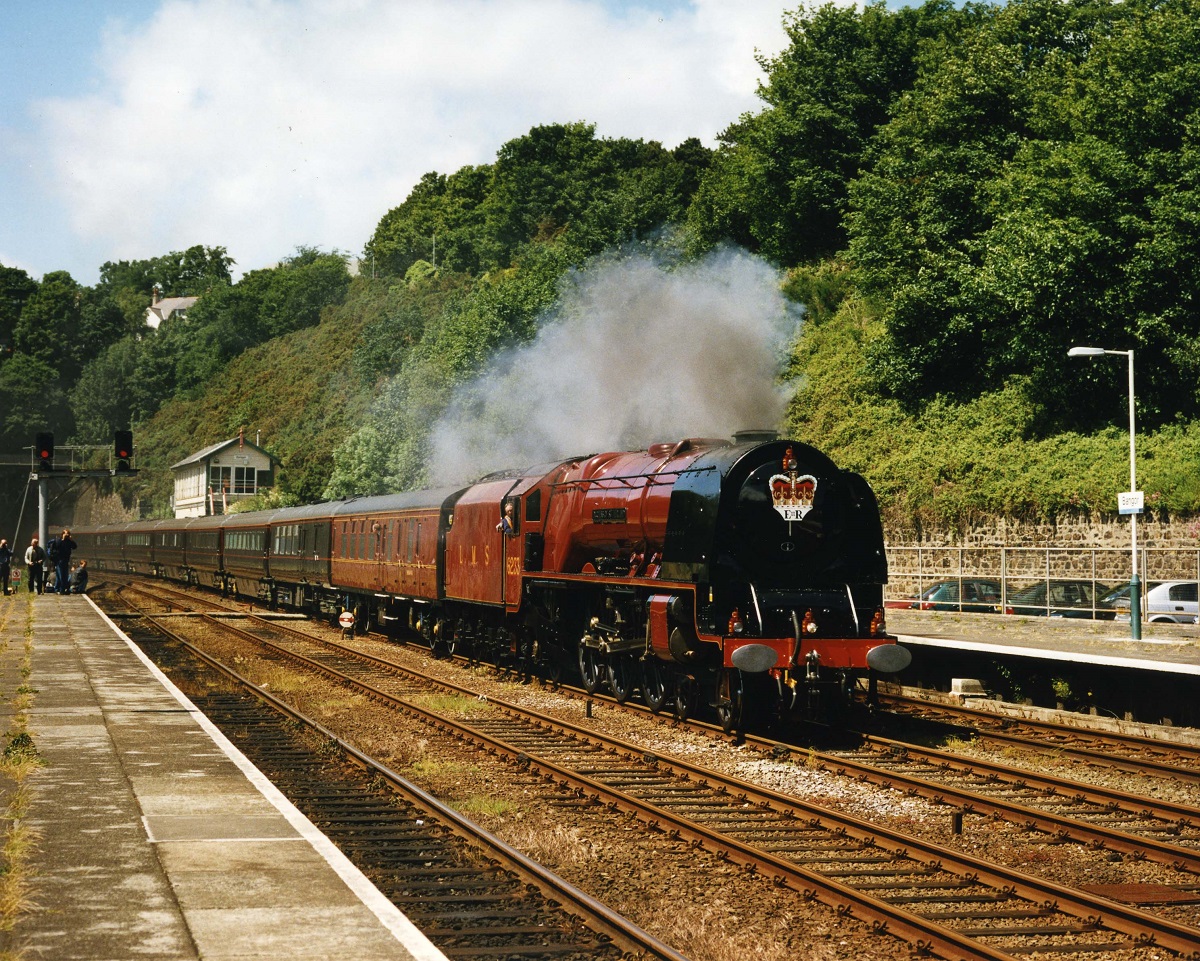 Fit for a Queen: the Royal Train and other VIP’s

Queen Victoria was the first reigning monarch to travel by train in the 1840’s. As Royal train travel increased, different Railway Companies had different approaches. The London, Midland & Scottish Railway operated many of the Royal trains, as they involved overnight journeys to and from Scotland. A dedicated Royal Train was only created in 1977, due to extensive travel by HM The Queen in her Silver Jubilee year. In her Golden Jubilee year (2002), our flagship locomotive 6233 ‘Duchess of Sutherland’ had the honour of pulling the Royal Train on the North Wales coast route – the first steam hauled Royal Train for nearly 40 years.

Lamps and headboard made for ‘Duchess of Sutherland’ to haul the Royal Train in 2002.

Royal Trains are the only trains to carry four lamps. They carry three lamps across the front buffer beam and one at the top of the smokebox – the lamp you can see at the top of this photograph. Although great secrecy surrounded the planning of the steam hauled Royal Train, at least one Trust volunteer guessed what was happening, due to the number of lamps requiring painting prior to signwriting!

On the day, a special lamp was also presented to HM Queen Elizabeth as a souvenir of her ride behind our steam locomotive! The lamp was subsequently permanently mounted inside the Royal Train.

This photograph features the Royal Train staff and police who accompanied HM The Queen and HRH The Duke of Edinburgh during the 2002 Golden Jubilee tour of Great Britain. Inspector Mick Foster travelled on the tour wearing this British Transport Police uniform, as seen in the photograph.

On 22nd March 2005, 6233 ‘Duchess of Sutherland’ was involved in another special event. This time, the locomotive pulled the Royal Train along a stretch of the famous Settle-Carlisle railway with HRH The Prince of Wales on board. This was part of HRH’s visit to see the restoration that had been carried out by the Friends of the Settle-Carlisle railway group.

This photograph shows the footplate crew posing by 6233 ‘Duchess of Sutherland’ at Hellifield station before the journey. The headboard on the front of the engine was made specially for the occasion. It features the coat of arms of HRH The Prince of Wales.

A special souvenir version of the timings for the Royal Train journey behind 6233 ‘Duchess of Sutherland’, 22nd March 2005.

Our museum collection also includes Saloon 45000 – a luxurious railway carriage built for the London & North Western Railway in 1920. During a working life of nearly 70 years, it was used by many Royal family members (including HM The Queen and HRH Prince Philip), as well as Winston Churchill and the President of India. Oh, and we mustn’t forget the LMS President – it was his official saloon! The Saloon was like a mobile hotel – it would be used by one or two important guests, with staff to look after them. It made it easier for the guests to travel around Britain.

Below are some of the items used by passengers travelling in Saloon 45000.

In Saloon 45000 there is a corner cabinet above the sinks in the bedrooms and bathroom. This contains a carafe – a special type of bottle with a wide neck to make pouring easier. There is also a drinking glass for the passenger’s use. In the later stages of the Saloon’s long working life (1920 to 1989) there is correspondence looking at the possibility of having a bottle of Schweppes tonic water in the carafes, as with “tap” water there was uncertainty regarding freshness.

This was used at breakfast time to hold slices of toast. It was made by ‘Mappin & Webb’ and engraved with ‘L.N.W.R.Co. dining saloon’ (London & North Western Railway Company). The ‘Mappin & Webb’ company produced high quality silverware. They were granted a Royal Warrant as Silversmiths to Queen Victoria in 1897.

Each bedroom had a chamber pot. If you needed the toilet in the night and the main toilet was occupied, you could use this! Although there are two separate toilets on Saloon 45000, one is at the end furthest from the bedrooms. It is also in the staff quarters, so the provision of a chamber pot in each bedroom was a wise precaution!

One of these brushes is stamped ‘LMS Hotels’ so must have found its way onto Saloon 45000 during a journey. Hopefully each brush was used for clothes or shoes, but not both!

This certificate was issued to Saloon 45000 in 1938. It gave permission for people travelling on the Saloon to send and receive wireless messages through the radio. This particular certificate was kept by Reginald Pateman, Superintendent at Wolverton Carriage Works, which is where Saloon 45000 was built.

During its working life, Saloon 45000 was part of the Royal Train on many occasions. Here are a few examples of it being used:

This was for a journey from Scunthorpe to Lowton Junction, to Glasgow, to Euston, from 6th to 7th May 1974. The journey was for HM The Queen and HRH The Duke of Edinburgh to attend a special event to celebrate completion of the West Coast Electrification from London to Glasgow. Electric wires had been fitted above the track all the way from London to Glasgow (about 400 miles or 640km). This allowed faster, cleaner electric locomotives to be used, which collected power from the overhead wires using a springy collector item called a pantograph.

“Visit of Her Majesty the Queen and HRH The Duke of Edinburgh on Tuesday 7th May, 1974 on completion of the West Coast Electrification from London to Glasgow”

This diagram shows the Royal Train formation for a journey from Paddington to the West of England, 20th July 1988. Saloon 45000 (then numbered 2911) was one of the carriages in this train.

Back to Stop! Look! Listen!
Back to Home page